Captain (or Rear Admiral) William Bedford Diego is a major character in System Shock 2 and its short story. He was the son of the infamous Edward Diego. As a UNN Navy captain he became the hero of the Battle of Boston Harbor during the Eastern States police action. Being a husband of a TriOptimum board member, he helped to reach a compromise between the megacorporation and the UNN that led to the Von Braun expedition. He was appointed the captain of the UNN Rickenbacker, the Von Braun's escort ship.

Diego's childhood was turbulent. The memory of his father's actions on Citadel Station hung over him for the rest of his life, and would later inform his career in the UNN Military. After his mother's suicide, Diego vowed to never repeat his father's mistakes.

Diego's most famous career achievement is the UNN victory at the Battle of Boston Harbor. The UNN heavily propagandized the event: the conflict was heavily stacked in the favor of UNN forces, as the insurgents were outnumbered and under-equipped - yet, Diego was revered as a hero and celebrity even still. Even as he rose to the rank of Rear Admiral, he was still known as "Captain" William Bedford Diego.

Capt. Diego met with TriOptimum researcher Marie Delacroix around the start of 2114. Delacroix was developing a device that could bend space-time, allowing faster-than-light travel. The UNN was both interested in this technology and wary as to how the TriOptimum corporation, headed by ex-career criminal Anatoly Korenchkin, would abuse the device. Delacroix was working on a strict deadline from TriOptimum, which Diego promised to extend.

During the voyage, the ships received a distress signal from Tau Ceti V. Diego and Korenchkin both headed down to the planet to investigate, each hoping - for their own reasons - to establish first contact with an alien race.

The signal originated from an apparent crash site on the planet's surface. Unbeknownst to Diego or Korenchkin, the crash site belonged to the remains of Citadel Station's Beta Grove, which ejected from the Station forty years before. Around the remains of Beta Grove were scores of alien eggs belonging to SHODAN's biological experiments, now known as the Many.

Korenchkin and Diego fell to the psychic influence of the Many, though Diego managed to resist with more success than Korenchkin or the other crewmen. Korenchkin had the eggs brought aboard the Von Braun. Diego objected, but did not stop him.

Possession by the Many

As the Many's Annelids took over the Von Braun and Rickenbacker, Diego's mental state deteriorated as the Many manipulated him. Sgt. Melanie Bronson resisted him, and instated a brutal martial law in an attempt to quell the Many's spreading influence throughout the ship. Only when Bronson and her men were completely outnumbered did Diego and the Many's Hybrids manage to crush her attempts at establishing order. 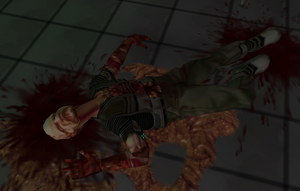 Diego finally overcomes the Many's control of his mind only when soldier has begun fighting back against the Many in force. In an unofficial report to a military superior near the end of his life, he expresses great remorse for allowing Korenchkin to bring the Annelid eggs aboard. It is implied that Diego forcibly removed the Annelid that was attached to his body by himself. After this, Diego makes his way down to the Rickenbacker's AutoDocs to stabilize himself.

Diego establishes contact with soldier when the protagonist reaches the Richenbacker. However, he is dead when found in the Med Bay, and is carrying one final audio log. Whether he died due to his attempt to remove the Annelid or if he was killed when soldier reverses the gravity aboard the Rickenbacker is unknown.