The UNN Rickenbacker (or U.N.N. Rickenbacker) is a military starship, heavy destroyer class and a major location, the seventh explored in System Shock 2.

After the disaster at Citadel Station, it was decided that all major space explorations, such as those conducted by TriOptimum Corporation, should be a joint operation with the Unified National Nominate. The UNN Rickenbacker was designed and constructed in tandem with the Von Braun, which it escorted on its maiden voyage. Unlike the Von Braun, the Rickenbacker is not equipped with Faster-Than-Light technology and therefore must "piggyback" with the Von Braun in order to transit through lightspeed. This "piggyback" involves an umbilical connection between ships, allowing an exchange of cargo, equipment and crew.

The captain of the Rickenbacker is William Diego, the hero of the battle of Boston Harbor and son of the infamous Edward Diego.

The Rickenbacker is divided into three Decks:

Deck A was heavily damaged by explosions when the Many overran the barricades the surviving military personnel had established. Several parts of the Deck are open to space, the atmosphere only held in by force shields, making it difficult to navigate.

Entering Deck B requires rerouting power, resulting in reverted gravity on the Deck. Soldier must walk along the ceiling to work his way through.

Notable crew members on the UNN Rickenbacker include: 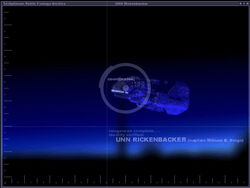 Full side view of the warship 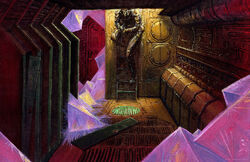 Concept Artwork of soldier G65434-2 in the
UNN Rickenbacker 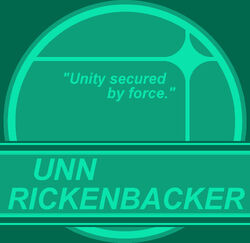