Turrets were used to defend parts of the Von Braun and the UNN Rickenbacker from alien attack, but once the ships came under control of the Many they were reprogrammed. Turrets can be found in a dormant state in and around vital parts of the ship (Upgrade Units, Bulkheads, etc.), and once a hostile unit is detected they activate and attempt to eliminate the threat.

One of the standard TriOptimum military defensive emplacements, the Slug Turret is the most basic of Turrets encountered by the player. It can be distinguished from the other Turrets by its grey steel armor. They are equipped with a Slug rifle that fires at a fast rate, but deals low to moderate damage. Can take a fair amount of punishment before being destroyed. Note: all the Turrets have the same amount of hit points.

A more advanced type of Turret. They are equipped with a Laser rifle that fires moderately fast and deals 5 times more the damage of the Slug Turret.

Another advanced type of Turret. They are equipped with a rocket launcher that fires accurately at a slow rate, but unfortunately deals a high amount of damage, and the explosions have a splash damage. Also, the damage is always the same if only within range of the explosion.

There are ceiling-mounted Laser Turret variants only found on the UNN Rickenbacker. 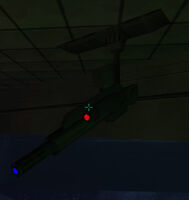 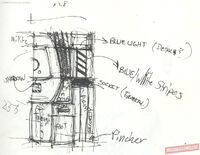