The TC-11 "Brick" Grenade Launcher is a weapon that appears in System Shock 2. It is the most basic heavy weapon in the game. Unlike the earlier generations of launchers, the TC-11 utilizes a reverse polarization magnetic launching mechanism instead of compressed gas.

It is one of the most useful weapons in the game, dealing large amount of damage to almost any type of enemy - provided the right ammo is used. Grenades of all kind are fairly plentiful throughout the whole game.

This is also the first found weapon to feature splash damage.

A Marine can choose to start the game with this weapon.

Many players find it first in the Hydroponics Deck Sector B. However, there is also a broken Grenade Launcher in the MedSci Deck's Crew Quarters. 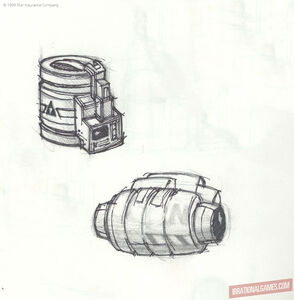