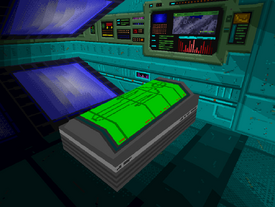 Surgery Machines are fully automatic devices aboard Citadel Station which, when activated, instantly heal the Hacker. Unlike their counterparts aboard the Von Braun, they do not cost anything to use regardless game difficulty. They have a rough outline of a human body on the top and glow a faint green, making them easy to spot.

Due to the violent events which occurred during SHODAN's takeover of Citadel, by the time the Hacker awakens from his healing coma there are only three functional Surgery Machines remaining on the entire station. It is therefore a very good idea to memorize their location and/or place markers on the map.

Additionally, while seemingly invulnerable, they can be destroyed if they take enough damage from explosives or weapons! Watch your aim around these invaluable machines!

They are found on the following Levels:

There's also a Surgery Machine on Level 2 - Research, but it's broken.

System Shock (Remake) version
Add a photo to this gallery
Retrieved from "https://shodan.fandom.com/wiki/Surgery_Machine?oldid=28365"
Community content is available under CC-BY-SA unless otherwise noted.