The Stasis Field Generator is a heavy weapon found in System Shock 2. This weapon fires multiple projectiles that deal no damage, but immobilize all types of: Half-Annelids (Hybrids), non-stationary Mechanicals (Robots),
Half-Mechanicals (Cyborgs) and Arachnids.

An experimental device, the Stasis Field Generator was originally developed as a medical device - an effective, non-narcotic method to both tranquilize and immobilize patients undergoing major medical procedures. However, the military and security utility quickly became apparent to the TriOptimum executive corps. The generator can essentially freeze in place a target for a variable period of time. However, the stasis field uses a lot of power and its effect greatly decreases with distance. 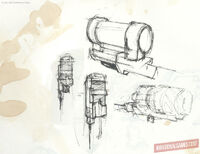