Soldier G65434-2 is the protagonist character in System Shock 2.
He is a soldier of the UNN.

The details of soldier's military career are subject to player choice. Broadly speaking, as a member of either the Marines, the Navy or the OSA, soldier served for three years across a variety of postings before requesting to serve aboard the UNN Rickenbacker in 2114.

Before the Many's takeover of the Von Braun, soldier was incapacitated and involuntarily outfitted with military-grade cybernetic modifications by SHODAN, masquerading as Janice Polito. He was cryogenically frozen and stored in Cryo-Recovery A on the MedSci Deck of the Von Braun. Bayliss, acting on orders from "Polito", erased soldier's memory recovery files. By the time the game begins, the Many was in control of the Von Braun and the UNN Rickenbacker, save for a few Resistance fighters. SHODAN, as Polito, awoke soldier and briefed him on the situation.

After his awakening, soldier's main imperative was to meet with Polito on the Operations Deck two floors above. However, the Von Braun was crippled by the Many, the ship was on security lockdown, the main power was off and the elevator shaft was shut down by a series of malfunctions on the Engineering Deck. Advised by Polito, soldier restored the elevator to working condition, only to discover that the elevator shaft above the Hydroponics Deck was blocked by the Many's growing biomass. After a further detour through Hydroponics, which the Many have transformed into a hatchery for their Annelids, soldier used a chemical to push back the Many's growing biomass and unclog the elevator shaft.

When soldier reached Ops, SHODAN dropped her facade and began taunting him. In reality, Polito had committed suicide days before, and the AI assumed her identity in a misguided attempt to establish trust between the soldier and herself. SHODAN explained that she was responsible for creating the Many, them being the results of her bio-engineering experiments on Citadel Station's Beta Grove. The Hacker ejected Beta Grove to prevent SHODAN from using her experiments to conquer Earth. Thirty years later, the Grove landed on Tau Ceti V, where it would be discovered by the Von Braun. A sliver of SHODAN's memory was contained in the Grove, which survived on a Data Wafer which Bayliss later brought aboard the Von Braun. While the AI went into forced hibernation, the Many evolved beyond her control.

SHODAN issued an ultimatum to the soldier, stating his only chance for survival lay in destroying the Many for her. She informed soldier that destroying the Von Braun was the only option, but not without transmitting her consciousness to the Rickenbacker first. Furthermore, SHODAN tasked soldier with sabotaging the XERXES system, so that she could assume control of the Von Braun's systems.

Soldier used Malick's quantum chips to give SHODAN control of XERXES' Simulation Units, and used the Resistance's makeshift transmitter to pull power away from XERXES. With control of XERXES' systems, SHODAN discovered that the Many had wrapped its biomass around the Von Braun and the Rickenbacker, locking the two ships together. She deduced that the only course of action to destroy the Many was for the soldier to enter its biomass and kill it from within. She directed him to the Rickenbacker, whose final escape pod, when launched, would propel soldier into the Many's body.

However, before soldier could reach the umbilical connecting two ships, he was stopped by a Psionic Barrier created by Anatoly Korenchkin. Korenchkin, who gave in to the Many's influence and mutated into a powerful Psi Reaver, summoned soldier to the bridge of the Von Braun. Korenchkin met his end in the ensuing battle.

On the Command Deck, soldier briefly encountered two survivors, Thomas Suarez and Rebecca Siddons, who fled the Von Braun on an escape pod.

Finally, soldier reached the Rickenbacker's command center, and launched its escape pod with himself inside. When he came to his senses, he was inside the Body of the Many. He fought his way past the Many's strongest forms and eventually made his way to the Brain of the Many, which he destroyed. Before the Many died, it left soldier a final warning that SHODAN was not to be trusted.

Soldier was spat out of the Many's dying body though an orifice, finding himself on the Rickenbacker's bridge. However, something was amiss. SHODAN revealed that she never intended to destroy the Von Braun, but to use its reality warping faster-than-light drive to reshape space and time into her own image instead. The line between reality and SHODAN's mind began to blur as soldier fought his way through her consciousness. Along the way, he discovered data logs hidden in SHODAN's memory by Marie Delacroix, who had been killed on the Von Braun after outliving her usefulness for the AI. Delacroix posthumously revealed that she opened a weakness in SHODAN's defenses for the protagonist. Soldier confronted SHODAN in her godlike form and defeated her, bluntly rejecting her offer of alliance.

As space and time returned to normal, soldier approached a terminal on the bridge of the Rickenbacker, deactivated the ship's alarm, and sent out a hail stating that he had regained control of the ship.

Soldier's quantity of Health and Psi Points depends on the game's difficulty and his own statistics. His speed and damage output also vary.

At the beginning of the game, the player can choose one of three branches of the UNN military to serve in. This choice effects what statistics the player starts the game with. After this, the player selects from three off-screen tours of duty per year for three years, to further build their character's starting stats. Each tour of duty has unique flavor text and statistical bonuses. Their choice of military branch and tours of duty also effects what gear the player starts the game with: for example, picking a tour to boost the Maintenance skill grants the player a Disposable Maintenance Tool, and selecting a tour to train the Energy Weapons skill gives the player an Apollo H4 Argon-Suspension Laser Pistol. After the third tour of duty, soldier is deployed to the Rickenbacker, and the game proper begins.

Soldier is arguably the most powerful human character in System Shock 2, due in part to his illegal military-grade cybernetic modifications. He is relatively weak at the beginning of the game, but grows in power by spending Cybernetic Modules, awarded for completing objectives and found throughout the levels. Cybernetic Upgrade Units use Cyber Modules to improve soldier's statistics and skills, such as his Strength, Agility, Hacking skill and Psi Powers.

Soldier can become even more powerful through O/S Upgrades which are permanent, free bonuses of greatly varying quality. However, he can only select four out of sixteen throughout the whole game, and O/S Upgrade Machines are single-use and extremely rare. O/S Upgrades cannot be uninstalled. 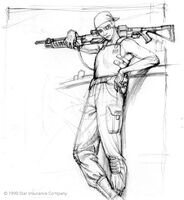 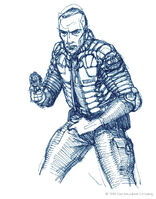