ShockEd is the collective name for both the game editor and included tools used to create various mods such as fan missions or custom objects for System Shock 2.

Originally named DromEd in Looking Glass Studio's Thief games, it was provided with the understanding that fans would receive no official support or documentation. Despite this as well as a notoriously user-unfriendly interface a number of fan missions were created, in addition to a number of fixes for the retail edition of System Shock 2. The latter were eventually being distributed the an all-in-one installer SS2Tool which became 'official' once Night Dive Studios acquired the rights to System Shock 2 and Good Old Games began including it in purchased downloads.

In September 2012, a user named Le Corbeau on the French forum ariane4ever shocked the fandom by posting updated versions of Thief 2 and System Shock 2 that contained an unprecedented amount of bugfixes, in addition to raising or eliminating a number of 'hard' limitations such as how many polygons the came could display at one time. It was discussed in English here and here. The new version of the Dark Engine was dubbed "NewDark", and a number of mods such as SecMod were remade to make full use of the updated game engine.

The origin of NewDark is still a mystery as Le Corbeau made less than a dozen posts total on the French forum. There is speculation that it may be the work of a former member or members of Looking Glass Studios or related to the discovery of a beta version of System Shock 2 for the Dreamcast, but neither of these have been proven. All that is known is that such a project would have required either access to the original source code or an incredible amount of technical skill (and perhaps both).

No person or company has claimed credit for creating NewDark as of 2017. 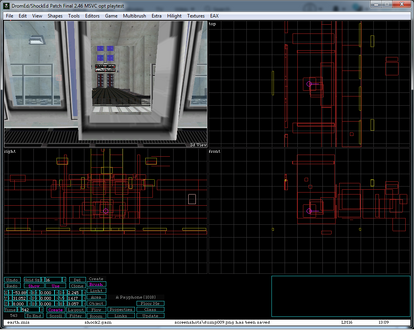