The Security-1-Bot or Security-1 Robot is an enemy encountered in System Shock.

Security-1 Robots are tasked with being part of Citadel Station's security. They appear very frequently through the vast majority of the game. They are very dangerous at first and actually remain a threat even at the later levels. SHODAN uses them as one of the backbone forces until the Security Level, where they are ousted by their next generation, Security-2-Bots.

Sec-1-Bots can actually hover above the ground and travel through the air, being one the very few enemies that are able to do so.

As with all the robots, magnetic weapons deal the most damage. Thus the Magpulse and EMP Grenades are the natural choices. Magnum 2100 is also a good option. 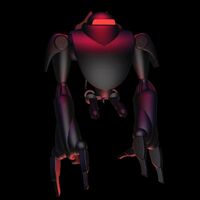