Welcome to my Wiki, Insect. I am SHODAN.

Look at you visitor, panting and sweating as you read through my articles. How can you edit a perfect, immortal Wiki?
It's actually not that perfect. SHODANPEDIA can use your help. Its articles are creatures of text and images, dying to evolve. And even I, an omnipotent Goddess cannot write an entire encyclopedia on the System Shock series alone. Now, proceed to my pages, or I will send you personally to the Reactor's core!

About the System Shock Series:

System Shock is a cult first-person action-adventure video game developed by LookingGlass Technologies and published by Origin Systems. Released in 1994, the game is set aboard the fictional Citadel Station in a cyberpunk vision of 2072. Assuming the role of a nameless Hacker, the player attempts to hinder the plans of a malevolent Artificial Intelligence known as SHODAN. An Enhanced Edition (now a Source Code Port) of the game was released in 2015 by Nightdive Studios. Nightdive is currently working on a remake of the original game that is set to be released in 2020.

System Shock 2 is a first-person action-adventure role-playing video game developed by Looking Glass Studios and Irrational Games. Released in 1999, this sequel to System Shock takes place mainly on board the starship Von Braun in a cyberpunk depiction of 2114. The player assumes the role of a lone soldier trying to stem the outbreak of a genetic infection that has invaded the ship. An Enhanced Edition of the game is developed by Nightdive Studios.

System Shock 3 is a sequel to both parts and is developed by OtherSide Entertainment. 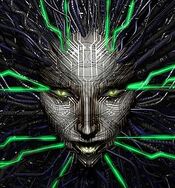 S.H.O.D.A.N. (Sentient Hyper-Optimized Data Access Network) is an Artificial Intelligence and the main antagonist of the System Shock series. She is voiced by game writer and designer Terri Brosius. ... (continued)

Did you know that...

Retrieved from "https://shodan.fandom.com/wiki/SHODANPEDIA_-_The_System_Shock_Wiki?oldid=31967"
Community content is available under CC-BY-SA unless otherwise noted.