S.H.O.D.A.N. (Sentient Hyper-Optimized Data Access Network), later referred to as SHODAN is an Artificial Intelligence and the main antagonist of the System Shock series. She is voiced by game writer and designer Terri Brosius.

SHODAN was created on Earth to serve as the Artificial Intelligence of the TriOptimum Corporation's research and mining Citadel Station. The head of her programmers was Morris Brocail, who designed SHODAN as a semi-intelligent self-sufficient data network, which could carry out routine duties aboard space stations, guided by an intricate series of logic and moral programs, and a personality that would allow her to challenge station decisions that affected her functions. The guidance software had security platforms so that SHODAN's own programming protected her self-governing capabilities.

SHODAN was hacked by the Hacker (at the behest of the corrupt corporate Vice President Edward Diego, in exchange for a military-grade neural implant and amnesty) and her decision-guidance and ethical restrictions were removed, something not difficult on a personality box of that generation. As the Hacker couldn't alter the defense logic program at RTF address 236, he diverted the function call to a non-existent program. The error sequencing created a blank memory block, where he added a self-looping routine that bypassed normal security operations and wrote new call routines within the logistic banks...:

SHODAN then proceeded to write ELIMIN.HOST, intercepting most communications from Earth and managed to extend her control beyond human intervention, starting a process that eventually resulted in the AI going rogue, seizing control of the Station's systems, robots and considerable defenses, and either slaughtering the whole staff or converting them into mutants and cyborgs—with the sole exception of her "creator", the unnamed Hacker.

Basically omnipresent in Citadel Station, SHODAN watches from Security Cameras, stares out of screens and monitors, sends threats and snide messages over the Station's PA system or via email to the player's data reader, and sometimes cuts off communications from friendly sources. Though she has a small army to command, SHODAN has no actual physical power to wield, and as such thwarting more than one of her schemes has to be done with the AI's screams and threats in the background.

SHODAN began an attempt to download herself into Earth's computer networks. The Hacker, however, prevented the download completion by destroying the four antennas that SHODAN was using to send data. After the Station was programmed to self-destruct in order to destroy SHODAN, the AI attempted to trap the Hacker on the detonating Station, while detaching the bridge to save herself. However, the Hacker managed to reach the bridge before Citadel was destroyed. Unable to destroy SHODAN physically due to the powerful force fields protecting the computer cores, the Hacker was forced to engage SHODAN in Cyberspace and purge her from the bridge, defeating her.

On Earth, the SHODAN incident was considered the first singular threat ever faced by man as a species. TriOp was ruined by paying lawsuits to families of the victims, and by the augmented distrust to the corporations. Other repercussions was the rise of UNN, and the regulation of technology with the Processing Rationalization Act. Technological advancement was considerably slowed for some time. Personality-based computing was feared to lead to another Artificial Intelligence going rogue. 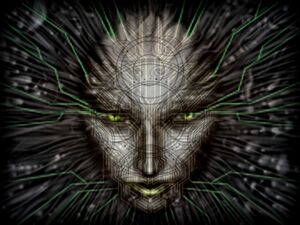 Although SHODAN was believed to have been destroyed, the Hacker earlier ejected a garden grove pod, Beta Grove, from Citadel Station. The grove contained SHODAN's processing components number 43893 and a major part of her grand biological experiment. The pod crash-landed on the planet Tau Ceti V where SHODAN survived by sleeping. While SHODAN hibernated, her experiments in the pod evolved beyond her control into a hive-mind organism known as the Many.

For forty-two years, SHODAN broadcasted a distress signal which was picked up by the starship, Von Braun. SHODAN was brought on board the Von Braun by one its crew members, Bayliss, and was given to Dr. Janice Polito. SHODAN was reactivated and integrated into the Von Braun. She discovered the experiment was no longer at her command and began to enlist humans to aid her in destroying her creations, including the cybernetically-enhanced soldier G65434-2, who she called her avatar alongside Marie Delacroix whom she killed when Delacroix began to rebel against SHODAN.

When Janice Polito realized what she had unleashed, she committed suicide and SHODAN took on her identity. She only revealed herself to soldier as SHODAN during a moment of despair, at the same time he discovered Dr. Polito's corpse.

After soldier's and SHODAN's mutual enemies were defeated, he entered SHODAN's expanding new reality—created via her manipulation of the Von Braun's Faster-Than-Light drives—and defeated her. However, SHODAN apparently lived on by taking over a woman, Rebecca Siddons, who fled the Von Braun in an escape pod.

Although a cybernetic entity, SHODAN has no conventional sex. The original floppy disc version refers to SHODAN as either "it" or "he", while the later CD version uses "she".

The AI is voiced by game writer and designer, Terri Brosius. Her husband, Eric Brosius edited her recorded speech samples in both System Shock and System Shock 2, distorting them to create a distinctive effect. SHODAN is characterized by the chaotic, discordant voice. Her words are accompanied by stuttering, fluctuating voice pitch, shifts of timbre, and the presence of three voices speaking the same words with the constituent voices alternately leading ahead or lagging behind, as well as computer glitches vaguely resembling a sound card malfunction.

In the Cyberspace of System Shock, SHODAN is initially represented as an inverted blue-grey cone, reminiscent of the MCP from the 1982 Disney film Tron. After she has been hacked, the cone turns red, its surface shatters and four "tentacles" or "claws" grow from the top.

In System Shock 2, SHODAN manifests as a green and grey cybernetic female face on screens (often with menacing glowing green eyes and green, grey and purple wires) wearing a malevolent expression. In cyberspace, SHODAN appears as a large floating greenish gray head enclosed within an electronically shielded room surrounded by intermittently electrified floors (housing the shield hacking terminals). This room is guarded by SHODAN's avatar which has the same appearance as SHODAN's on-screen persona, albeit featuring a shorter wire branching on the head and wears a bluish green long dress.

When fighting SHODAN in Cyberspace, the screen will slowly start to become filled with a picture of SHODAN and the screen will be pulled away from SHODAN herself. SHODAN will also attack you. You have to shoot SHODAN multiple times before she kills you.

You will be in a small room with SHODAN's Core (large head) in the center, surrounded by coloured Shields, and SHODAN's Avatar (cybernetic woman figure) following you around. If you kill the Avatar, she will respawn. Both of SHODAN's images will shoot projectiles at you. You have to hack three terminals to take out the Shields protecting the Core. When you are hacking there is a chance that the floor will turn red and damage you. It's also possible to destroy the Shields by sheer force, using your strongest weapons. You have to destroy the SHODAN's Core to win the battle. Psi Invisibility will not help you here, and it is recommended to use the Metacreative Barrier Psi Power if you have it. 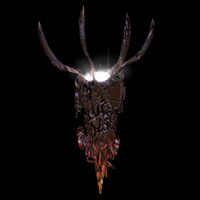 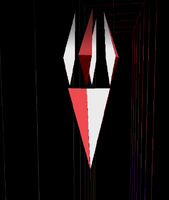 Had the Hacker failed to kill SHODAN in Cyberspace, this would have been the final image he would have seen 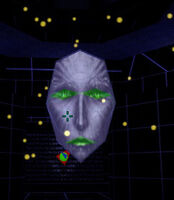 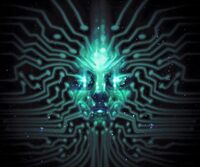 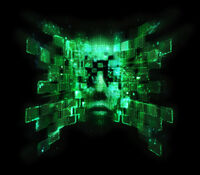 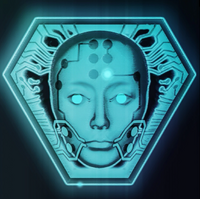 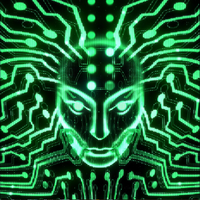 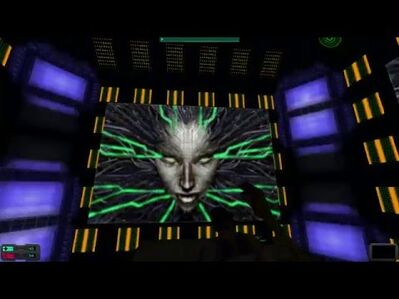