Rumblers are semi-advanced Annelid Hybrids found aboard the Von Braun and UNN Rickenbacker in System Shock 2.

Rumblers are large and strong, covered in fleshy muscles. Few human features remain, save for its humanoid shape and an atrophied face on the creature’s shoulder. The Rumbler represents a “pupal” stage between the Hybrid and the Psi Reaver - its body is designed to protect the human host’s brain within, which itself is changing radically in preparation for the next and final stage in the Annelid life cycle. The Rumbler itself makes no use of the unconnected brain, its motor functions governed by its own cells.

Rumblers are highly aggressive, and will chase the player on sight. They possess no psychic abilities, relying on brute strength melee attacks to harm the player. They are first encountered on the Recreation Deck, and make appearances throughout the rest of the game.

Rumblers can drop a Rumbler Organ, which can be researched to earn a damage boost against them.

The Rumbler is much faster than a creature of its bulk has any right to be. Try and find a sniping position where it can't reach you, or it will rip you apart within seconds. Since its form is mostly annelid, it is particularly vulnerable to High Explosive damage which is dealt when using Anti-Personnel ammo. It is also vulnerable to Exotic Weapons' Anti-Human setting and Incendiary attacks (both Grenades and Psi Powers, namely Localized Pyrokinesis and Projected Pyrokinesis). It is resistant to Armor-Piercing Bullets. Be prepared to use a lot of ammunition to take one down.

Rumblers are rare and show up late enough into the game that if you take care to save up on special ammo, they shouldn't be too much of an issue.

Rumblers are also vulnerable to Psionic Hypnogenesis and Imposed Neural Restructuring, as well as the effects of the Stasis Field Generator. 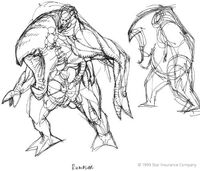 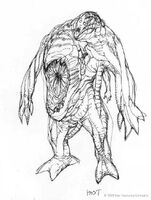 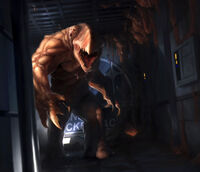 Promotional artwork for Nightdive Studios' re-release of the game
Community content is available under CC-BY-SA unless otherwise noted.
Advertisement