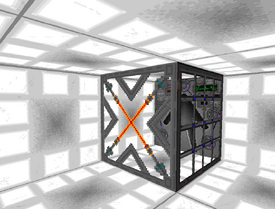 Restoration Bays/'Stations '(also called Regeneration Rooms/Chambers) are devices that resurrect the killed player. They are located on Levels R through 7 (except Groves) and have to be activated first. Under SHODAN's control they were used as Cyborg Conversion Chambers/Sites.

This device is kept inside a cage and consists of a grey wall with dark grey human-like recess, and small screens on the upper right corner. Around the human shape are five circular-shaped devices linked to each other with thin wire, possibly for defining the parts of body (arms, legs, and torso) that will be reconstructed. Restoration Bays are kept behind energy doors.