Recreational (or Rec) is the fifth Deck of the Von Braun and either the fourth or the fifth visited in System Shock 2.

SHODAN informs soldier that to deprive XERXES of any further power, he will have to send a warning signal to Earth from the Athletic Sector. There, a transmission device has been set up by the members of the Resistance, including Enrique Cortez and Marie Delacroix. Unfortunately, the transmitter is powered down and needs a code to be activated. Soldier discovers that the code is hidden within the contents of the Art Terminals scattered throughout the Recreation Deck in the Mall, Garden and the Crew Quarters. While in the Quarters, he also finds a keycard giving him access to the Athletic Sector. At the Athletics he restores local power and reaches the transmitting device. After soldier sends off the transmission and completes the objectives on the Operations Deck, XERXES is sufficiently powerless, allowing SHODAN to unlock the elevator to the Command Deck. Soldier proceeds there to reach the UNN Rickenbacker and stop the Many. 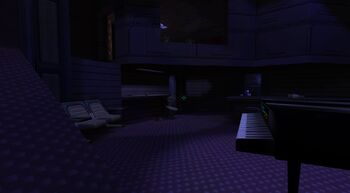