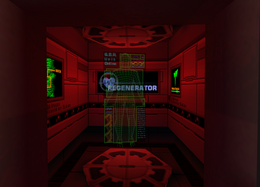 Quantum Bio-Reconstruction Machines, Q.B.R. Units, Resurrection Stations or Regeneration Stations are devices found in System Shock 2 that can resurrect a killed player either free of charge (on Easy difficulty and in Multiplayer) or for the price of 10 Nanites on Normal and higher difficulties. They function similarly to the Restoration Bays found in System Shock. QB-RMs are located on Decks 1 to 6 of the Von Braun and on the Deck A of the UNN Rickenbacker.

These devices are located inside a small red chamber with computer screens lining up the walls and a spinning humanoid hologram inside (appearing after activation). They work by taking Quantum Entanglement samples: genetic and physical templates of a specific person. If the person with the stored template dies, the Machine can restore them to a semblance of their past, healthier condition.

When you see a Quantum Bio-Reconstruction unit, activate it! You never know what’s around the corner, even in a quiet hallway. Death comes quickly on the Von Braun and the Rickenbacker. If a player dies on a level in which they have activated a Resurrection Station, then they come back to life at that Station.