MedSci or Med/Sci (Medical/Science) is the second Deck of the Von Braun, but the first to be explored by soldier G65434-2 in System Shock 2.

Soldier is awakened from the cryostasis by Dr. Janice Polito, who introduces him to the current situation aboard the Von Braun. She tells him to head to Operations Deck and meet her there, in order to retake control of the ship.

Alas, the elevator that goes up to Operations is powered down. In order to reach Ops, the protagonist first has to reach the Engineering Deck to turn on the main power that XERXES, ship's computer system, has disabled.
Engineering is only accessible through a maintenance shaft, the entrance to which is secured by a keypad.

Dr. Polito explains that this security code should be known by Dr. James Watts, who can be most likely found in the Crew Quarters of the Medical section of the Deck. Getting there involves acquiring Deck 2 Crew Access Card from Grassi, a medical technician working in the Biopsy lab. Although Watts isn't in his room, the soldier finds an R&D card, as the trail leads back to the Science part of the Deck, to the Research and Development sector.

The protagonist arrives there to find Dr. Watts dying. He tries to warn the soldier of the Many's plan for him before he passes away. The code to the maintenance shaft is found on his body. Ultimately, after many hostile encounters, soldier reaches the maintenance access hatch and heads down to the Engineering Deck. 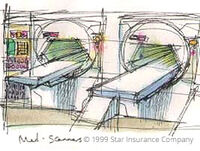