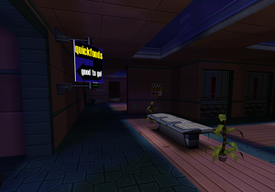 While in the movie theater, make sure you look twice before using the Replicator. Some things never change, even in the future (hinting at the high price of snacks, just like the present).

There's a rather large stock of Nanites (supposedly Rosenberg's Nanites), and some Cyber Modules, in Nikki's room at the Recreation Deck's Sensual Stimulation Chambers.

The Casino
Add a photo to this gallery
Retrieved from "https://shodan.fandom.com/wiki/Mall?oldid=27735"
Community content is available under CC-BY-SA unless otherwise noted.