Hydroponics (or Hydro) is the third Deck of the Von Braun explored in System Shock 2.

Since soldier cannot reach Deck Four by the Elevator due to a biomass blocking its shaft, he's forced to explore this Deck. Apparently, the Many have begun to use Hydroponics as a breeding ground, taking advantage of its climate control systems. The protagonist will need to find a way to disrupt their functioning in order to head to Operations. Polito will instruct soldier to pick up an experimental chemical agent called Toxin-A, designed to kill off the infestation aboard the Von Braun. Once the toxin is researched, soldier can insert its vials into four Environmental Regulators located throughout the Deck to purge the annelid biomass.

This Deck is divided into four different sectors each with their own Environmental Regulator that allows the environment to be regulated and changed if needed to accommodating any organic beings whether plant, animal, or alien.

Sector B and C 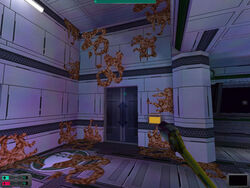 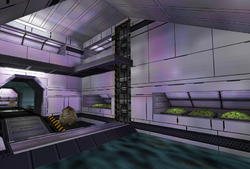 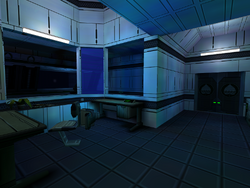