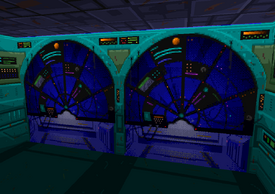 Healing Incubators were used to heal the Hacker during his healing coma after the implantation of the Neural Interface supplied in a deal by Edward Diego. The coma lasted six months. Precisely why SHODAN managed to overlook the Hacker during her takeover of Citadel Station is unknown, though it's possible that Diego may have smuggled him aboard in order to keep his presence and actions a secret.

System Shock (Remake) version
Add a photo to this gallery
Retrieved from "https://shodan.fandom.com/wiki/Healing_Incubator?oldid=27862"
Community content is available under CC-BY-SA unless otherwise noted.