The Hacker (also referenced to as Subject L9546 or Employee #2-4601) is the protagonist of System Shock, whom the player controls throughout the game.

Virtually nothing is known about the Hacker, other than he lives on Earth in New Atlanta's Sector 11, building 71-G.
He broke into the computer systems of the TriOptimum Corporation and accessed files concerning Citadel Station, a space station owned by TriOptimum. He was subsequently arrested by TriOptimum soldiers and taken to Citadel Station, and brought before Edward Diego, a corrupt TriOptimum executive. Diego offers to drop all charges against the Hacker in exchange for a confidential hacking of SHODAN, the artificial intelligence that controls the Station. To entice cooperation, Diego promises the Hacker a valuable military grade cyberjack implant. After succeeding in hacking SHODAN, removing the AI's ethical constraints, and handing control over to Diego, the protagonist undergoes surgery to implant the promised Neural Interface. Following the operation, the Hacker is put into a six-month healing coma.

When the Hacker wakes from his healing coma, he finds Citadel Station under control of SHODAN, who, without her ethical constraints, has gone rogue and believing herself to be a kind of god.[1] He is contacted by Rebecca Lansing, a TriOptimum counter-terrorism consultant, claiming that Citadel Station's mining laser is being powered up for a strike against Earth (as part of SHODAN's plan to destroy all major cities on the planet). Rebecca says that a certain crew member knows how to deactivate the laser, and promises to destroy the records of the Hacker's incriminating exchange with Diego if the strike is stopped.[2] With information gleaned from log discs, the Hacker destroys the laser by firing it into Citadel Station's own shields. Foiled by the Hacker's work, SHODAN prepares to seed Earth with a mutagenic virus—the same one responsible for turning the Station's crew into mutants.[3] On his way to jettison the chambers used to cultivate the virus, the Hacker discovers that the controls are guarded by Diego (now transformed into a powerful cyborg by SHODAN), and must be defeated before continuing.

Next, SHODAN begins an attempt to download herself into Earth's computer networks.[4] Following Lansing's advice, the Hacker prevents the download's completion by destroying the four antennas that SHODAN is using to send data.[5] Soon after, Lansing contacts the Hacker, explaining that she has convinced TriOptimum to authorize the Station's destruction, and provides him with details on how to do it.[6] After obtaining the necessary codes, the Hacker initiates the Station's self-destruct sequence and flees to the escape pod bay.

Once more the Hacker is hindered by the Diego Cyborg. The Hacker dispatches him, and attempts to disembark. However, SHODAN prevents the pod from launching; she seeks to keep him aboard the Station, while the bridge — which contains SHODAN — is jettisoned to a safe distance.[7] Lansing starts to explain that he can still escape if he reaches the bridge, when SHODAN intercepts and jams the transmission.[8] The Hacker makes it to the bridge as it is released from the main Station, which soon detonates. He is then contacted by a technician who manages to circumvent SHODAN's jamming signal, informing him that she can only be defeated in cyberspace, due to the powerful shields that protect its Mainframe Computers.[9]

Using a terminal near the mainframe, the Hacker enters cyberspace and destroys SHODAN. After his rescue, the Hacker is offered a job at I.C.E.Ware Security department. The Hacker declined the position, however (as he preferred his current lifestyle, along with fearing that they would remove his implants, and that his face would get publicity in the NetPlex zines), and escaped from a high-level holding area soon after the initial interrogation.

After his victory, the Hacker became the most famous person in the world.[10] Some indiscriminate time later, he withdraws from the spotlight, sending one last thank-you mail to Lansing before disappearing.[11]

The Hacker was briefly mentioned by SHODAN while soldier G65434-2 was on the Operations Deck.

The Hacker is set to return in System Shock 3. In what capacity this role will be remains to be seen. 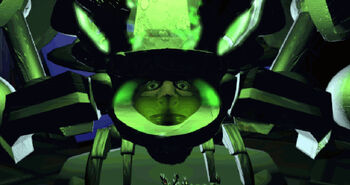 The Hacker becoming a Cortex Reaver 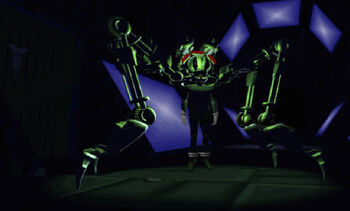 The Hacker as a Cortex Reaver 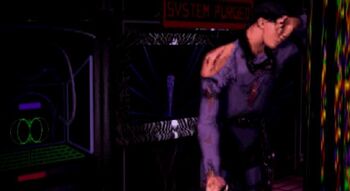 The Hacker after defeating S.H.O.D.A.N.