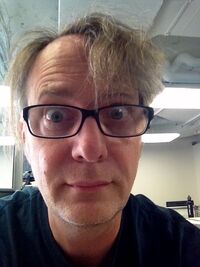 Eric Brosius is a musician and video game developer, a former employee of Looking Glass Studios who edited and processed Audio Logs in System Shock and was the Audio Director of System Shock 2. He is a former member of the band Tribe and is married to Terri Brosius, also a former Looking Glass employee and Tribe member (and the voice of S.H.O.D.A.N.).

Eric is best known within the video game industry for his sound design and music work in several games by LookingGlass Technologies, Looking Glass Studios, Irrational Games and Ion Storm, particularly the Thief series. He and his wife still contribute to games made by Harmonix and Irrational.

In addition to System Shock 2 (in which he recorded the voices of the Protocol Droids and all the big Robots), Brosius has contributed music and sound design for Terra Nova: Strike Force Centauri, the Thief series, Guitar Hero, SWAT 4, Freedom Force vs. the Third Reich and other games.

Community content is available under CC-BY-SA unless otherwise noted.