Engineering is the first Deck of the Von Braun, but the second explored by soldier in System Shock 2.

When soldier arrives there, XERXES has already blocked off the access to the Engine Core. To re-enable the access, the protagonist travels to Fluidics Control, only to discover the code has been changed by Constance Sanger. An audio log by the door reveals that she has left to Cargo Bay 2A. After picking up the keycard in Cargo Bay 1A, he heads into 2A Bay and gets the code from Sanger's body. Once inside Fluidics Control, it is revealed that XERXES has blocked access to the computers. However, Marie Delacroix has installed a backdoor, which can be acquired in the Chemical Store Room. Soldier picks up the relevant hardware, plugs it into the Command Control computer and opens access to the Engine Core in Fluidics Control. Afterwards, he heads into the Engine Core, re-enables main power and enters the elevator to meet Janice Polito on the Operations Deck. 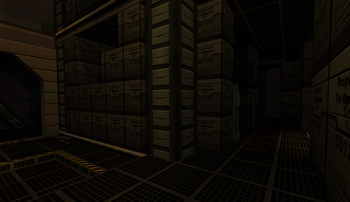