Earth is the human home world. Little of Earth is shown directly in the games, though it is know to hold great political value and sway. Earth and the humans thereupon is divided into many nations on a nominal level, though most if not all of these countries are directly owned by corporations such as TriOptimum and eventually the UNN.

Earth is also routinely threatened by the villains of the franchise, SHODAN and The Many. 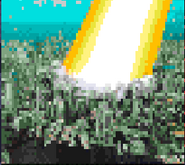 Add a photo to this gallery
Retrieved from "https://shodan.fandom.com/wiki/Earth?oldid=30629"
Community content is available under CC-BY-SA unless otherwise noted.