Cyborg Midwives are an enemy in System Shock 2. They are the only cyborgs under the control of the Many other than reprogrammed Cyborg Assassins. They may be based on some of SHODAN's earlier cyborg experiments on Citadel Station.

After being taken over by the psychic influence of the Many on Tau Ceti V, Dr. Marc Miller brought several Annelid Grub Eggs aboard the Von Braun's Hydroponics Deck. The Grub Eggs were fragile and needed constant care, but emitted lethal toxins, making human care impractical. The Many imparted into Miller's mind schematics for drastic and illegal cybernetic procedures which would allow a human to care for the eggs. Miller decided to convert the female nurses of the Von Braun, as he felt they already had the necessary nurturing qualities. Miller performed the first conversion on Nurse Erin Bloome.

Physically, the body of a Cyborg Midwife below the waist has been completely removed and replaced with mechanical components.

Much of the rest of their body is interwoven with cybernetic implants. An auxiliary CPU in the base of the spine serves as a controller, overriding most signals sent by the subject's natural brain. Both speed and musculature have been mechanically enhanced, and the cybernetic apparatus also serves as physical shielding for the softer human tissues.

Due to their metal legs, they produce a distinct clanking noise while walking on the deck of the Von Braun, making them easy to detect from a distance. Their servos emit various whirring and buzzing noises. The muscles from their hands and face have been removed, leaving them with a ghoulish rictus.

Unlike the Hybrids, whose motor control has been overwritten by the Annelid parasite and beg to be killed, the implants in the Cyborg Midwives' brains and spine, along with the Grub Eggs mind-control, make them willing servants of the Many. They mutter inanely to themselves in a scratchy and electronically distorted voice. This distortion becomes more prominent when the Midwife is angered, surprised, or killed. When a Midwife is aware of soldier's presence, she will make violent threats to him in an unfittingly serene tone. Midwives will stop at nothing to defend the Grub Eggs in their care.

There is one Cyborg Midwife on the Engineering Deck, in the Von Braun's Hold, but they appear in abundance on the Hydroponics Deck. They appear consistently throughout the rest of the game, except for the final level.

Being more machine than organic, Midwives are resistant to Anti-Personnel weaponry, but vulnerable to EMP and armor-piercing weaponry. If you have to take on a Midwife in a head-to-head confrontation, stay moving to dodge her energy blasts. If your strength is good, close in as much as possible - the Midwife's melee attack is less damaging than her laser. 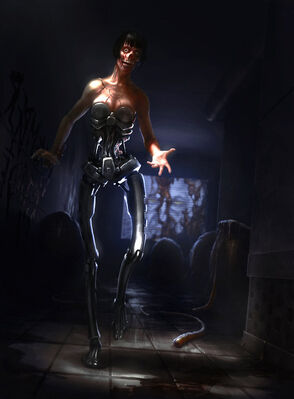 Promotional artwork for Nightdive Studios' re-release of the game
Русский
Community content is available under CC-BY-SA unless otherwise noted.
Advertisement