The Cyborg Elite Guard is an adversary encountered in System Shock.
It is one of the most powerful and dangerous foes in the game.

The Cyborg Elite Guards are SHODAN's personal bodyguards. They are met exclusively on the Bridge, where they guard SHODAN's Throne of God.
Their task is to protect the Mainframe Computer and its only access in the form of a Cyberspace Terminal. These Cyborgs are deployed at the level's core en masse, making the final room a tough challenge.

These Cyborgs are generally very heavily muscled and toned. Elite Guards wear grey-blue stabilizing boots with wide base and frames encompassing the top part of the calf, that allow them to handle various surfaces. They also wear a harness at their crotch and waist, connected to the black backpack that they wear. Around the chest is an energy belt that is also connected to it. The backpack itself serves as a power source, allowing for different type of attacks, actively scanning the area, a powerful shield and more. It takes up most of the space on their back, with additional mount at the neck. The iconic black helmet with red glowing visors is a direct part of the power pack. Beige transmission/power cable connects a hardware attachement located on their torso near the heart to the left side of the helmet.

An enormous cannon with several stabilizing wires occupies most of the Elite Guard's right arm, while the left one is free. This is their weapon of choice (85% chance of use) at most ranges. As it's shot, it lights up in white, and a brown halo along with green flashes momentarily surround it.
This weapon fires a hitscan (instant-hitting) energy projectile that deals serious damage, taking down more than ¼ of the Hacker's health when he's not protected by any level of Energy/Projectile Shield.

On rare occasions (15% chance) or at longer range (100% chance at 8 to 9 squares of distance) the upper part of their pyramid helmet (along with the power/transmission cable) lights up in red and generates a moderately fast projectile (called Elite Mutant Fire) of similar colour. These missiles can be deflected when shot at, to the point of flying backwards (though they cannot hurt the Elites) and disappear when they hit any surface.

During a pain frame in which they are stunned (officially they have only 5% of Disruptability) these Cyborgs either tilt their head back, splashing blood, or receive a momentarily shock to their power source, causing a light violet flash and sparks running across their system.

When eliminated, they receive a fatal torso wound on the right side with a chunk blown out of it, lose balance as they fall to their knees and finally collapse face down.

Cyborg Elites Guards are easily one of the most formidable opponents the Hacker has to face. The combination of their high amount of Hit Points, super resistant Armor/shield, extreme Defense Value (meaning no critical hits unless playing on Combat setting 1) and super low Disruptability (stun chance), along with good weapon range and very high damage (without any Shield on, the Hacker will die after just 4 shots) is simply deadly. SHODAN's Node is protected by ten of them, so they also have strength in numbers.

It is thus strongly advised to kill them before they have any chance to retaliate. Engaging in a wide open fight is not recommended, in favour of a more stealthy approach (leaning around corners and keeping distance).

Wild mêlée fight is, however, not destined to fail. One must mandatorily use the TS-04 Laser Rapier combined with Berserk Combat Booster, act fast (preferably using Turbo Motion Booster System (on Turbo setting if possible to handle) at best, Staminup Stimulant at worst) or/and slow down the action with Reflex Reaction Aid, have First Aid Kits handy, turn on the Energy/Projectile Shield and still be prepared for a world of hurt.

Fighting at a distance, one will also want to use the most powerful weapons and ammunition available on the Citadel: 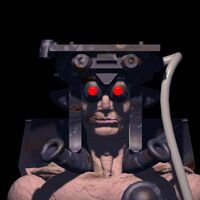 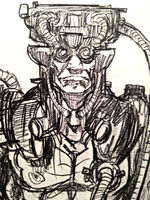 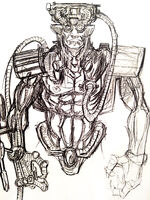 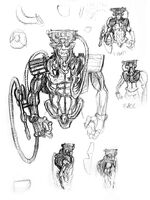