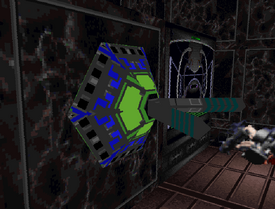 A Cyberspace Terminal, also known as a Cyberjack, is an interface terminal used to access Cyberspace, a digital realm.

There are a small handful of them scattered about Citadel Station, and can be identified as wall-mounted, hexagon-shaped cones with two antennas that protrude outwards. Each terminal has its own distinct Cyberspace area, which can be visited an unlimited number of times.

Cyberspace Terminals are found on the following decks: