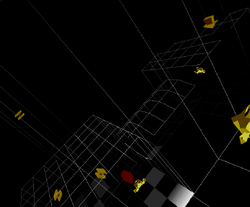 Cyberspace, also known as "C-Space" or the "Net", is a digital realm where all computers communicate and store data.

Special electrodes grafted into a Neural Interface let users "jack" into a Cyberspace Terminal of a computer network. The user's neurosensors translate the data structures of a computer network into a surreal visual simulation, which the user can navigate to access data, open electronic locks, and otherwise manipulate the system.

Hackers infiltrate specific areas in Cyberspace owned by companies, governments, or individuals with intent to steal or alter information. Time is of the essence for unauthorized users as hunter-killer routines are tracing for their location, disconnecting them from the Net after a few minutes. Watchdog security programs prowl Cyberspace for any foreign presence, attacking it. If a user's software integrity (Cyberspace health) runs out as a result of these attacks, his Net link is broken and he is ejected from Cyberspace, fatigued and injured from the shock.

The Net of the Citadel Station is divided into three primary realms - Research, Military, and the Security platform that houses SHODAN.

Cyberspace represents the aggregate of all computer network traffic, which cannot ordinarily be seen. A neural interface can translate this world of 1's and 0's into an immersive hallucination where important programs manifest as floating geometric shapes in immense rooms of glowing wireframe. Hallways between rooms represent rivers of data between nodes, which drag the user along in digital currents. Corporations have their own guarded logo-like icons within which their data is stored.

Data Fragment
A scrap of information that can be read anytime. Touching one, it transmits a brief message that is not stored. Appears as a large yellow square surrounded by four small orange diamonds.

Data Object
Touching one, it copies itself into the user's personal data storage device (such as a Multimedia Data Reader) and may be read later. Appears as a spinning purple cube.

Infonode
A buoy-like marker that imparts various pieces of information and sometimes explains the function of another nearby object, such as a toggle. Passing through an Information Node will scan it and provide data pertaining to the specific function of a related Switching Node. Appears as a geometric signpost.

Integrity Restorative
A program that refreshes a user’s Net link integrity by filtering out noise and corrupt code thus restoring his Cyberspace health. Appears as a red cross.

Security ID Module
It contains electronic access codes that open doors in the physical world, being equivalent to a specific access card. Touching one copies the code into the interface. Appears as a orange wafer marked with three squares.

Switching Node
A Cyberspace switch that activates something in the real world, such as a locked door. Touching it means flipping it, sometimes accompanied with a message explaining what was affected, unless a nearby infonode describes what the toggle activated.

Navigational Arrow
Icons that indicate the directional flow of data streams and are coordinated by the Net’s traffic orientation module.

Exit Portal
Touching it returns sensory input to normal after a few seconds of disorientation. This is commonly followed by disappointment to some users. Most Cyberspace areas have two exits. Appears as a ring of geometric wedges.

Cyberdog
A common but less powerful Cyberspace defenders, in the form of pit bull faces. It can break up into fragments that are missing self-preservation instructions until completely faded. However they continue to attack until then.

Cyberguards
Autonomous security programs in general, that protect sensitive data storage areas. They are represented by red and blue masks or ram-horned heads. They vary in strength, being capable of firing bursts of projectile currents that quickly reduce software integrity.

I.C.E. Barrier
Intrusion Countermeasures Electronics serve as an electronic barrier to intruders trying to scam restricted data such as information or software. They appear as geometric growths around a Cyberspace object and can be eliminated by a Drill software. The I.C.E. protocol was adopted by the Corporate Computer Protection Conference and for years was considered impregnable by hackers, until the computer piracy gang RazorFinger developed the Drill program. Some I.C.E. walls are better than others. Older I.C.E. utilities can sometimes be bypassed by various forms of the Fake ID infiltration program. More recent ones can actually counter-attack the user.

Cortex Reaver
These are cyborgs whose intelligence is driven by the brain of a human corpse taken involuntarily by SHODAN. In the Net they are dangerous and strong before crashing. They are represented digitally as red, fragmented faces.

Cyberspace Barricade
These barriers block certain areas of Cyberspace and are usually "unlocked" by killing all of the enemies in the area.

Hunter-Killer
An enemy that is routine to the net as the white blood cell is to the living body. Not assigned to any particular area within Cyberspace, this security construct is designed specifically to seek out and attack unauthorized users.

Pulser Combat
The software prototype for this Cyber weapon was developed by Yatsumora Cyberchannels Corporation in 2070. It transmits a focused burst of line trash that disrupts the integrity of any Net entity.

Turbo Navigation Booster
It doubles the speed of drifting and skidding through the Net. It was hacked up by jockeys of the Citadel's system by exploiting a little-known bug in the operating system in order to maneuver against powerful data streams

Recall Escape
An one-shot program which instantly rewrites a user’s address location to the point of entry in order to "retreat" from security system.

Fake ID
One-use soft tool which tricks I.C.E. defense barriers. BloodCat used an early version of this routine to pass into the accounting node for the National Business Machines Corporation in 2070.

Cybershield
Program which give limited defense against attacks, preventing integrity loss by constantly scanning link integrity software and cycling through error correction routines and then restoring the code to an uncorrupted state.

Decoy Evasion
One-use software tool which generates a decoy that distracts security programs, who then attack this ghost image instead of the intruder. Hackers think it came out of the infamous hacker underground of Bulgaria.

Retrieved from "https://shodan.fandom.com/wiki/Cyberspace?oldid=27939"
Community content is available under CC-BY-SA unless otherwise noted.