The Cortex Reaver is an enemy encountered in System Shock, both within Citadel Station and its Cyberspace.

Unlike most CyberSpace watchdogs, the Cyber Cortex Reaver is not a security program. Instead, it is a Net-active Cyborg whose awareness is constantly split between the physical realm (RealSpace) and CyberSpace. Reaver's intelligence is driven by the brain of an involuntary human puppet, using their dead body. Cyber Cortex Reavers are capable of quickly frying a user’s link integrity and withstand numerous attacks before crashing. Their Cyber forms are red, fragmented faces.

The Hacker first encounters one on the Flight Deck, while attempting to rescue a small squad of the Resistance survivors.

Unsurprisingly, its physical version can be killed fairly easily with the Laser Rapier.

The Hacker becoming a Cortex Reaver

The Hacker as a Cortex Reaver 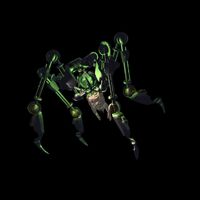 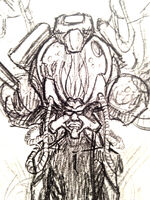 Concept sketch of the Cortex Reaver
Community content is available under CC-BY-SA unless otherwise noted.
Advertisement