Command is the sixth Deck of the Von Braun explored in System Shock 2. Soldier can access the UNN Rickenbacker from here.

Soldier G65434-2 arrives on this Deck in the primary elevator from the Recreation. SHODAN tells him to head to the Bridge of the Von Braun to acquire the Ops Override Access Card. That item is needed to transfer SHODAN's intelligence to the UNN Rickenbacker from the Von Braun and to destroy the latter. Using the tram, soldier makes his way to the second part of the Deck and eventually reaches the ship's Bridge, where he picks up the Access Card. Along the way he witnesses the remaining survivors fleeing in the ship's escape pods. Next, he follows SHODAN's instructions by backtracking to the Operations and Engineering Decks. When he returns to the Command, the Many anticipate the plan to destroy the starship, loading two shuttles with their offspring. SHODAN instructs soldier to destroy the shuttles to prevent the escape. Once done with that task, the protagonist makes his way to the Umbilical to the UNN Rickenbacker. However, just before reaching reaching the Grav Shafts, he is stopped by an undestructible Psi Barrier created by Anatoly Korenchkin, who urges to confront him on the Bridge. Once he's defeated, the soldier is now free to head on over to the Rickenbacker.

This Deck is divided into two parts: 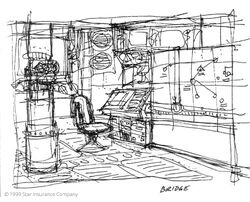 Concept Sketch of the Bridge

Deck Logo
Add a photo to this gallery
Retrieved from "https://shodan.fandom.com/wiki/Command_Deck?oldid=37336"
Community content is available under CC-BY-SA unless otherwise noted.