Start a Wiki
The Beta Grove is one of the Groves (also known as Eco-Pods) connected to the Executive Level of Citadel Station and explored in System Shock. It is easily distinguished by its toxic, orange terraformed surface. It also plays a major role in the sequel. 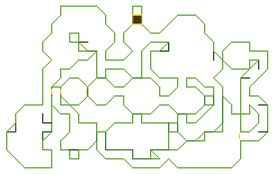 SHODAN had been using this Grove as a Petri dish for her bio-experiments. Gerard Koufax noted that SHODAN decided to seal off Beta Grove for unknown reasons and afterwards spent a whole day to override the circuitry. The Grove was finally jettisoned by the Hacker.

The ejected Grove - which contained SHODAN's grand biological experiment and one of her processing components travelled through space at incredibly high speeds (probably travelling through a worm hole) until it landed on Tau Ceti V. The biological life forms on board mutated to form The Many, a hive mind organism. During that time, SHODAN's processing unit 43893 was mostly dormant, but broadcasted a distress signal for 42 years. The signal was eventually picked up by the starship Von Braun. SHODAN's wafer was brought aboard this ship by Bayliss, an UNN Soldier, and given to Dr. Janice Polito. SHODAN was involuntarily reactivated and then integrated itself into the Von Braun system, leading to the events of System Shock 2.

Retrieved from "https://shodan.fandom.com/wiki/Beta_Grove?oldid=31337"
Community content is available under CC-BY-SA unless otherwise noted.