UNN-034 Assault Robots (labeled as Military Police) are the toughest of the three large Bots, and fire a Fusion Cannon. They are high performance military Droids, meant to be used only in the face of a significant threat.

The Navy uses these units aboard its orbital space stations and crafts. The UNN Rickenbacker carries a number of Assault Robots on board.

The sheer firepower these Bots pack can hardly be overstated. Even a single hit from their cannons hurts and a barrage of Fusion shots by an Assault Robot that has a bead on you is almost guaranteed to ruin your day.

Assault Bots are also significantly faster and more maneuverable than the Security and Maintenance variations.

They first appear on the Recreation Deck. After destroying one, you should search its chassis for salvageable equipment, namely Prisms or Portable Batteries. 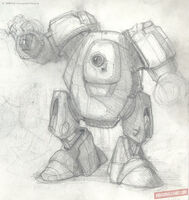