The Apollo H4 Argon-Suspension Laser Pistol is a weapon in System Shock 2, and is the most basic Energy Weapon. This weapon relies on refracted light to damage its target, while the energy bolt projectile shown in-game is fast and small.

A Marine can choose to start the game with this weapon.

The Laser Pistol requires Energy Weapons skill level 1 to use. No research is required. 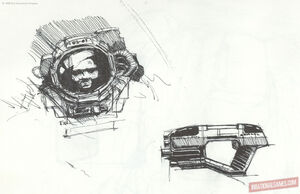